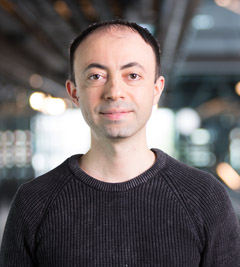 Dr. Aydin was born in Canakkale, Turkey in 1977. After completing his elementary and secondary school education in Canakkale, he went to Istanbul, where he attended Istanbul Ataturk High School of Science until 1995. He received his Bachelor of Science (B.Sc.) and Master of Science (M.Sc.) degrees with high honor from the Electrical and Electronics Engineering Department of Bilkent University in 1999 and 2001, respectively. He then enrolled in the PhD program of the same department and worked as a teaching assistant for one year. Starting from 2002, he worked as a Graduate Research Assistant in School of Electrical and Computer Engineering at Georgia Institute of Technology, Atlanta GA USA and received the PhD degree in 2008. As a result of maintaining an interest in machine learning and bioinformatics research, he worked as a post-doctoral fellow for three years in Noble Research Lab, which is part of the Genome Sciences Department at University of Washington, Seattle, WA USA. From September 2011 to Februray 2014, he worked as an Assistant Professor in Electrical and Electronics Engineering Department of Bahcesehir University, Istanbul, Turkey. Currently he is an Assistant Professor in Computer Enginering Department of Abdullah Gul University, Kayseri, Turkey.